How to play Teen Patti in 3 minutes?

Learn how to play Teen Patti in this easy to understand game guide. Teen Patti or 3 Patti is the most loved desi card game of India. The game quite similar to the poker game and is also referred to as Flash/ Flush or 3 card brags in other regions of the world.

As the name clearly indicates; 3 Patti or 3 Cards; the game is played with 3 cards. A card game, with the best combination of luck and strategies.

Whether you are a beginner or a professional card player, this easy to understand article will help you learn to play 3 Patti in a few minutes. 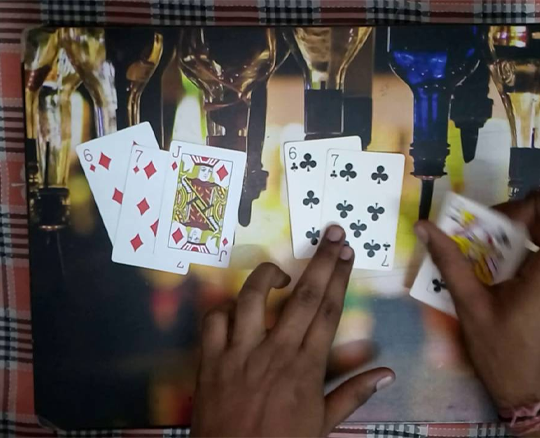 Basics of Teen Patti that you should Know!

Whether it’s online or offline Teen Patti, the game is played in almost a similar manner.  The game is best played with 3 to 7 members to predict the cards becomes quite Difficult.

The next action is to make a call or raise. if a player opts for the call that means he will continue in the game without adding any money in the pot. Whereas raising means, increasing the bet amount and adding the money in the pot.

Note: The players who choose to raise has more risk of winning or losing the bets than other players.

Let’s learn how to play offline and online Teen Patti in easy steps:

Log in to your favourite casino site.
Choose the dealer ( the player who has the highest card value.)
Select your 3 Patti table.
Place the ante bets & collect the money in the pot.
Place your initial bet (ante)/ side bets (optional).
The dealer will distribute the cards starting from his leftmost player.
The cards are dealt; now choose to Play or Fold your cards.
Decide to call/raise or play/fold as per your card values.
A player with highest card value wins the money in the pot.
You can also request for sideshow / Showdown.

If you have heard and played poker game earlier, you must be familiar with two terms i.e. to raise or to call. A player has to take the action (raise or call) after 3 face-down cards have been dealt.

That’s the only similarity you’ll find in the poker and 3 Patti game known as the desi poker of India. Rest the entire betting process is different.

In case you are consistently losing a big sum of money; you can opt to fold the cards at any point of the game.

As the betting rounds progress, the pot value keeps on increasing till the game round finishes. The winner of the game is decided based on the highest to lowest hand ranking system.

Learning how to play Teen Patti Online is much easier to play than traditional 3 Patti. Also, the winning chances are better when playing online.

Who is the dealer in 3 Patti? The player with the highest card value; he has to reveal that card to act as a dealer.

Fold is a situation when a player can quit the game by throwing the cards on the table.

A player cannot ask for the show until two of the players have been dropped out from the game round. Following situations may arise:

Sideshow(Compromise): It’s a situation when you are not confident about your cards winning and has already placed a bet. A sideshow is a request made to the last player who placed a bet on your cards It will let you reveal the cards with that players on the table. The best hand wins.

To Remember: The other player can also refuse to accept your request. Each of the player on the Teen Patti table is liberal to take any action or move in Teen Patti.

Show Down: Any of the two final players can ask for a showdown to end the game by revealing their cards. The player having the best hand value wins. Three situations may arise:

So, now the question may strike; Who is a Blind and Seen Player? 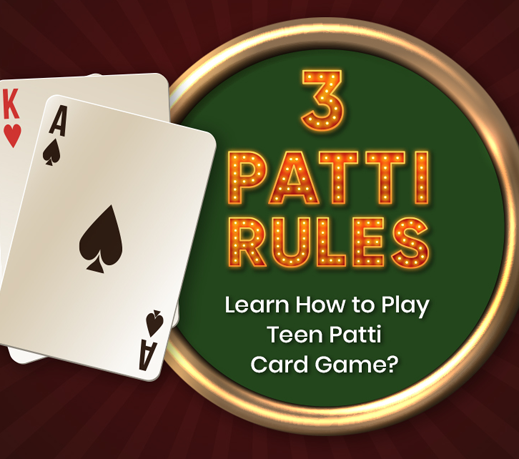 The rules to play 3 Patti online or offline is pretty similar. As mentioned earlier this card game is played with 52 cards with Ace as the highest card and 2 as the lowest card.

Each player is dealt with three face-down cards. The boot amount (the minimum stake value)is collected from each player and is added to the pot. The pot value keeps on increasing after every betting round. The last player who survives is the winner of the pot amount.

No doubt 3 Patti is an easy-to-understand game but before you invest your real money it is also important to know the hand rankings used in this game. A player must be able to recognize the hand patterns to place bets confidently.

Teen Patti has become a popular casino game in a short span of time. You can easily find this card game in online or land-based casinos in states like Goa, Sikkim etc. The credit goes to the advanced technology that plenty of Teen Patti Variants are available online.

Teen Patti online gives you the opportunity to learn how to play teen Patti and earn real money while sitting at home. Some of the popular Teen Patti Variants are 4X Boot, Muflis, AK47, 999 and many more. 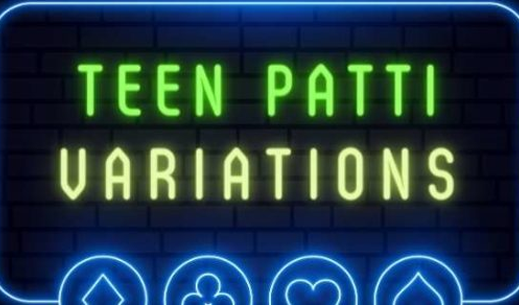 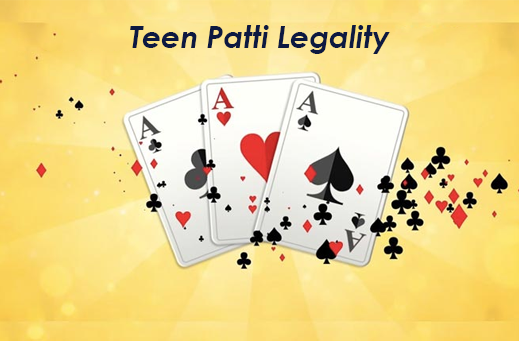 Is teen patti is legal in India or not? Teen Patti belongs to India. It is considered as the game of chance as per Indian gambling laws. So, unfortunately as per PGA,1867; it is illegal to play any game of gambling.

But, somehow it’s not stated in the public gaming act anywhere that online gambling is illegal. So if you want to play Teen Patti and other Indian traditional games online like Andar Bahar; online gambling sites like Fun88, Luckyniki etc are 100% legal and safe.  All these sites are based out of India, so there is no fear of any legal repercussions.

If you are a beginner, we suggest you play teen Patti on a limited stake table. A limited stake means the betting amount is fixed on the table. You can’t place bets of your own choice.

When the pot limit is reached, it becomes essential for all the participants to show their cards and the player with the highest card value wins the game.

Whereas unlimited stake indicates Player’s can raise and place bets as per their bankroll. There is no fixed bet limit. Usually, this table is meant for high rollers. 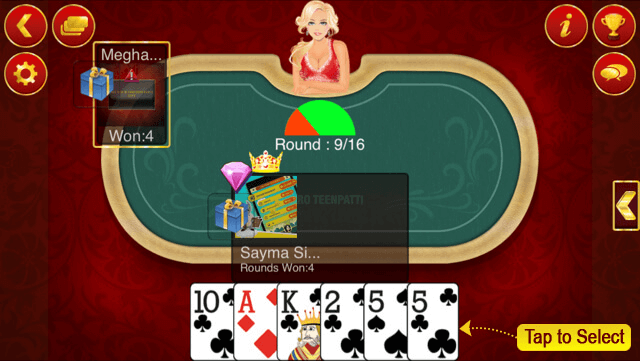 Just look at the image below to know high to low hand rankings used in Teen Patti: 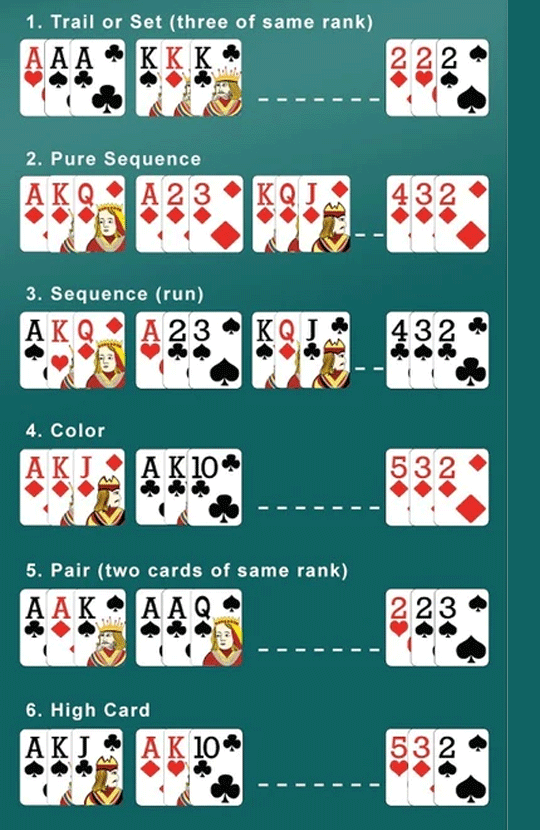 Being the most popular game of India. Patti Teen is available to be played on private tables. Isn’t it exciting? Invite your friends through Whats App, Facebook or Instagram and start playing an exciting Teen Patti game session anytime and anywhere. So, what you have to do to create your customized teen Patti table?

Who wins the Teen Patti game?

As you know, only a single player who remains on the teen Patti table can win the game. So how is this possible?

While playing you may face two possibilities:

Live Teen Patti also called sometimes three card poker in India. This interesting casino game is played against the casino or house instead of playing against other players.

The second thing to notice is the availability of additional side bets in live teen Patti.

To play live, you can also download apps on your Android and iOS devices. Plenty of Teen Patti Apps are available on the play store and App Store.

Another option is to signup at any of our listed casinos like Lucky Niki, Fun88, 10CRIC and enjoy the best gaming session ever.

We hope this mini-guide must have cleared all your doubts and issues regarding how to play teen Patti. If you think you are ready to play teen Patti online and place real money bets; 10CRIC, Pure casino, Jungleraja are the best Teen Patti casinos for Indian players.